The nation is celebrating the 68th Independence Day. The people are ready to express their patriotic feelings in one way or the other. But the common MAN are still waiting to see a free India. 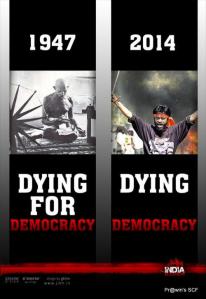 IANS and even the magazines and the newspapers off loading information about Independence day, freedom and patriotism, they reinforce the fact that each one of us should really take pride in the fact that we are a free country.

I just wonder, how short is the public memory or is it just me who feels in a country where every second day there is a case of honour killing, caste discrimination, regional discrimination and words scheduled caste and dalits are still a common parlance, what freedom are really talking about.

If i forget the larger picture, even after 68 yrs of independence WOMEN dont feel like stepping out of the house alone after 8, what freedom are we talking about, when there is a rape happening every 10 minutes somewhere in the country, why are we even celebrating this freedom?

I don’t think so we are free at all, especially for a woman in this country being free is an after thought as there are too many things that is still keeping women in dark, But on a contrary note also people here are free to indulge in as much bribery & corruption, as one likes. There, the words Dalits, caste, religion etc. don’t mean anything. You can even commit murder & get away with it.

Are we really free in India??

Independence is a word useful for politicians on August 15, who take seriously. We all know it by now and there is no sense in acting as if we don’t: August 15 is just another holiday. The malls will be full, new films will be released and the middle class will eat out as if it is not going to get another meal. This day truly illustrates how much in-dependent we have all become: we cannot live without an-other.

The freedom fighters fought for the freedom of the country. Now COMMON MAN is fighting for his own Freedom in the country with mean Politicians & Politics.

Whatever happens, As an INDIAN I SAY

Please feel free to share your story and any lessons you learned, you experienced , you came across in your life in the comments below.

Posted by MunnaPrawin on August 15, 2014 in Experiences of Life., Technical