If you’re in a relationship or dating someone or exploring a relationship where someone is toying or playing with your emotions, leaving you feeling miserable most or worse, all of the time, you need to leave ASAP. No one should have that much control over your emotions. You should never give someone that kind of power where they can take away your good and positive energy and happiness. And that’s exactly what they’ll be doing, that is, if you let them. 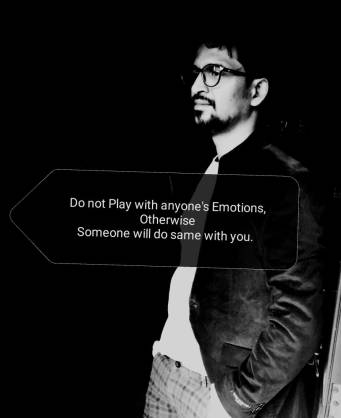 Some people will be wishy-washy, uncertain, confused, ambivalent, emotionally unavailable, or simply, they might just be a total jerk or a player. But what you need to do is recognize it when a person acts like they don’t know what they want, or if and when they change their mind every other day, or even every two minutes for that matter. We need to become aware of the types of people who we surround ourselves with in our lives. People who have these types of issues are not people who anyone should be associating with, but especially, on a romantic level, and even moreso, when we want something stable, long term, meaningful, and with future potential.

Think about it! Imagine going to sleep on a happy, peaceful, and loving note with your partner, where you feel so in love and as if you and your honey are better than ever, and BOOM! First second you open your eyes in the morning and look down at your cell phone and you have a long-a** text message saying how your partner loves you somuch, but has doubts and thinks that it’s better to end things for this or that reason. But wait, two days later, the cycle repeats, and they want you back, apologize and regret leaving, making excuses for why they’d left, and the instability goes on and on in this type of toxic pattern for—as long as you let it.

Many people will make promises to you, but never keep them. But when you’re in a relationship with someone who does this, and even moreso, when they do it quite often, it will not only drive you nuts, not to mention provoke you if you’re the sensitive type, but it will steal your inner peace, and make you feel miserable from all of the in and out, on and off, wishy-washy, back and forth instability. EVERYONE who wants to be in an exclusive relationship wants that relationship to be stable. No one gets into a relationship and feels good when they go through break up after break up, and all of the time.

Ukh! Breaking up with someone is hard enough, right? But when someone breaks up, makes up, and repeats that unstable pattern so often, you’ll never know what to expect. When someone is so unpredictable and wishy-washy, but you choose to stay with them regardless and perhaps because you love them, you’re basically causing your own misery by staying. My best advice would be to leave. A person who is so unstable that they break up or continuously go back and forth with how they feel or what they want with you, or if they make promises or give you their word, but never follow through, you should move on, and find someone who therapists will kill me for saying is “normal.”

You have to recognize when someone brings out the worst in you, and take it as a BIG sign that you should leave, because they’re obviously not the right match for you. You shouldn’t be sweeping red flags under the rug, and you shouldn’t give someone chance after chance to change and improve themselves or to just once—keep their word, when they keep letting you down.

Not everyone deserves multiple chances. I mean, O.K., if you’re married, you should be willing to fight for things to work and with all of your power, but in a relationship, when you see that you’re completely a mess and unhappy more often than not, and when you see that a person thrives on creating drama and is just making you feel miserable on a daily basis, LEAVE for goodness sake! I mean, come on! Relationships are all about seeing if you’ll be good enough together so that you can take things to the next level.

So when you see that someone is not only making you unhappy a lot of the time, but that they’re completely unstable and that’s one of the main things that’s provoking your unhappiness, you should start thinking with your head instead of your heart. You see, despite how much someone might love or even think that they love you, when a person really loves you, they won’t cause you so much pain and discomfort. And especially when they see how much they’re hurting you all of the time by their words and actions.

Now, when it comes to someone stringing their partner along, I’m basically referring to when someone tells their partner certain things, makes promises, but never follows through with them. I’m referring to when your partner lets you down a lot and convinces you that things will be different soon, and that they will change and improve, and that they’ll do whatever it takes to keep you by their side and make you feel happy, but nothing changes.

When someone strings you along, they usually do so like I said, for selfish reasons. But one of those selfish reasons is because they want everything to be their way. They usually aren’t willing to compromise or make changes, other than changes to what they might’ve originally said that they wanted or even in regards to what you both might’ve agreed to early on when dating. What’s really unfortunate though, is when a person strings their partner along when they’re older, and especially when their partner wants to settle down and have children, knowing ahead of time that the person is likely not going to be the person who they will be with in their future, but they want to be with them anyway, despite their age, and despite the other person’s circumstances.

Many people want what they want and simply don’t care who they might hurt along the way, as long as they get it. Having said that, not everyone’s motives are initially bad, and not everyone knows right away they they won’t end up with someone. I mean after all, how could anyone know how they’ll feel until they get to know someone on a deeper level. However, when a person directly tells you their concerns early on, yet you avoid or ignore them, thinking, “I can do it! (arrogantly or maybe even selfishly based on lust or thinking with anything but your head) or thinking that somehow you’ll make things work, despite the obvious challenges that maybe your partner had even voiced to you as concerns, you’ll be at fault for wasting their time.

You see, despite having pure and good intentions, it’s not always enough. Having pure intentions isn’t enough, when you don’t follow through with your word. And dreaming of having what you want and going after it when you ultimately know that it’s wrong or that someone isn’t the right match for you, yet you go after it anyway, is completely selfish and wrong. This is when listening to your instinct can be helpful. As well as using your logic and heart when exploring relationships.

When two people explore a relationship together, there shouldn’t have to be so much drama, confusion, instability, or back and forth. When you see that things aren’t working out early on or when you don’t feel that you can keep your word or follow through with what you initially thought or said that you would, you need to ends things with the other person sooner, rather than later. You see, holding off ending things when you have major doubts, is just plain selfish, because you’re holding back the other person from their “real” match.

Remember, it’s never nice to play with people’s emotions, to mislead them, or to be selfish and not think before you do things. Don’t lead people on. If you know that someone isn’t the right match for you, don’t waste their time by dating them and giving them hope. Giving false hope to someone or stringing them along for the ride, knowing that you can’t or won’t ultimately stick around is cruel. Think of the possible consequences of your actions and be careful not to hurt others by being selfish.

You should never waste someone’s time by stringing them along for your selfish reasons. Be a good person, and let someone know when you have doubts early on, and preferably before you get too close (attached or intimate), so that they don’t end up feeling used or that they were taken advantage of. Be selfless, not selfish, and even if you love someone but know that you ultimately won’t end up with them for whatever reasons, you shouldn’t waste their time. Love them enough to let them go… ……..By… Vishal

Finally one suggestion, People play with our feelings because we let them play,people usually play with feelings of those persons who are emotionally weak,they know even if they will hurt that person.he/she can’t do anything other than crying or making excuses but on the other side they don’t even try to play with feelings of mentally strong person because they know even if they will do it will not affect him/her so always act strong,no matter what so is going in your life,it will always help you

Please feel free to share your story and any lessons you learned, you experienced, you came across in your life in the comments below. If you enjoyed this, or any other other posts, I’d be honored if you’d share it with your family, friends and followers!

Posted by MunnaPrawin on November 9, 2019 in Experiences of Life., Life & It's Importance

Tags: do not cheat, dont play with feelings, emotions, MunnaPrawin

← Journey from Nowhere to NOW HERE
MAN Behind Million Smiles →