RSS
← Request to Parents & Parents-to-be
Journey with my Team →

Which framework works best: Kanban or Scrum? If you are on the verge of a brand new project, I bet this question has posed quite the challenge to your mind. Today Kanban and Scrum have grown in popularity and have taken the place of the previously popular waterfall method.

Agile –  Agile software development is based on an incremental, iterative approach. Instead of in-depth planning at the beginning of the project, Agile methodologies are open to changing requirements over time and encourages constant feedback from the end users. Cross-functional teams work on iterations of a product over a period of time, and this work is organized into a backlog that is prioritized based on business or customer value. The goal of each iteration is to produce a working product.

Scrum – The approach followed here is breaking down a complex task into simpler smaller manageable pieces which are easy to collaborate upon by the respective owners of the scrum.

Kanban – It is a Continuous improvement, flexible process. Kanban helps visualize your work, limit work-in-progress(WIP) and quickly move work from “Doing” to “Done.” It is a framework which utilizes visualization technique, limiting the number of tasks to be taken in “Work in Progress” column.

Kanban and Scrum are both iterative Agile development models, the goal is to get the most important tasks fully done (including testing) as soon as possible. The product should be potentially shippable at the end of the iteration. The difference is with Scrum the end is a set date, with Kanban it could be anytime the features that need releasing are done. In Scrum you plan a fixed period of time and with Kanban you plan just in time. 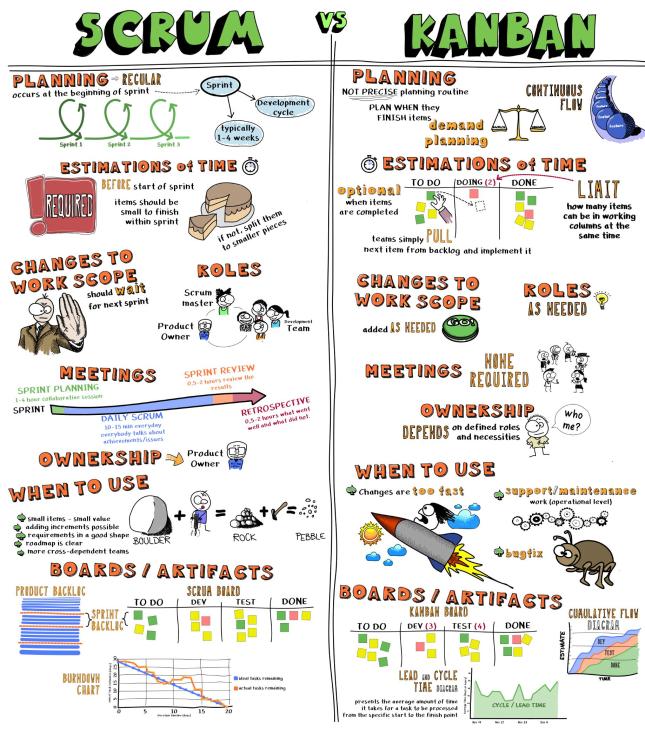 The scope of improvement –

The above points are easy to remember if you are able to visualize working on them. Ideally where the scrum follows a rather predefined set of principles. Kanban is backed up by the principle of flexibility. It allows you to track tasks that are of utmost importance for delivery.

Kanban is great for teams that have lots of incoming requests that vary in priority and size. Whereas scrum processes require high control over what is in scope, kanban let’s you go with the flow. Let’s take a look at the same five considerations to help you decide. What makes Kanban interesting is this aspect of it – that you could be continuously developing, integrating, testing and releasing at a cadence that you feel comfortable with – and so the whole concept of Continuous Delivery becomes much more ‘natural’ with Kanban.

How Does Kanban Work?

The only essential materials for kanban are a marker, sticky notes, and a board. Create “cards” from the sticky notes representing work items that have to go through several phases, from start to finish. Then draw columns on the board for each phase the cards need to go through, with a number at the top of each column that indicates the maximum number of cards (i.e., work in progress) that can be in that phase at a time. This number probably will and should change as your team improves its ability to gauge and reduce bottlenecks. The columns could simply be labeled “to do,” “doing,” “waiting,” and “done,” or they can be more process-specific, such as in the examples below.

Another helpful thing many teams do is dividing the columns in two, with one lane for “doing” and one for “done,” as you can see in the software development kanban example above. This way, it is clear to whoever is in charge of the following column to know when they can pull another card and begin working on it.

The beauty of this system is that it helps you detect where bottlenecks are. The work-in-progress limit stimulates conversations about process problems. In the examples above, you can see some columns are at capacity and some are not, but none has more cards than prescribed.

Please feel free to share your story and any lessons you learned, you experienced, you came across in your life in the comments below.

Posted by MunnaPrawin on March 22, 2019 in Technical

← Request to Parents & Parents-to-be
Journey with my Team →

One response to “Scrum Vs Kanban”